Hiho! I wondered how we could get on with potions if you try to avoid spoilers/guides/save-loads scumming in Might and Magic 6? In MM6 there is no recepies (compared to MM7)..

So I’m thinking about such workaround – to use spoilers for potion brewing, BUT drink certain potions only when characters would reach certain lvl. So it would be like ‘artificial’ restrictions which I’ll apply for myself to have legit and balanced gameplay.

But as I’m newbie in MM6 I’m not sure – which lvl boundaries I should choose? So I need your help, guys! So far we got such potion’s tiers:

First & second generation potions should be without lvl restrictions I suppose. Others – should have it. Maybe even each different potion could have certain ‘complexity’ parameter, eg:

I’ll post this message at several web-resources so we could make real brainstorm about it. Maybe there are also other ways to solve this problem? Please share your suggestions! I suppose I’m not the only person who wanna play with proper balance, as drinking black potions from the start by googling guides makes your newbie gameplay experience much less enjoyable (feeling yourself like you are cheating).

UPDATE: I still didn’t get proper solution from other players.. So I suppose we could use this restrictions:

Would be glad to see your comments.

When I’ve played I made some investigation on potions, there they are: 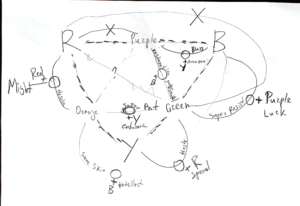 This entry was posted in Articles and tagged Might and Magic 6. Bookmark the permalink.